Are we really living in a post truth, fact free society?

No. Even though Fake News! has been playing out across the globe for close to twelve months now... even though a post-truth narrative threatens media, politics and science.

The real truth is, facts are more important, powerful and useful than ever before. They exist around us in more detail and have more to say.

WHY IT’S URGENT FOR NFPs TO ACCESS RELIABLE DATA

JBWere’s 2016 Cause Report paints a disturbing picture for not for profits. Australia is currently experiencing NFP saturation, with the highest ratio of NFPs to Australians on record (1:422). The research also reveals that a whopping 92% of NFP assets and income is controlled by a mere 8% of organisations. At the same time, the NAB Charitable Giving Index shows that the rate of charitable giving by Australians fell in the 12 months to August 2016. With a resilient national economy, this would appear to have more to do with changing attitudes than uncertain times.

Only those NFPs that are prepared to track trends and ask themselves how external and internal patterns of behaviour might influence their future are able to safeguard their future. NFPs that ask, ‘How can we interpret data in practical ways?’ ultimately respond more appropriately to the marketplace.

The data revealed the following:

5. We are particular about the charities we support. Knowing and trusting the charity is the top motivation (68%) for Australians to get involved with a charity. When assessing charities, 72% of Australians say that it is essential that administration costs are kept below 20% and that charities can verify their registration. 71% believe that transparent reporting of administration costs is vital. 65% say that it’s important to know where donations are going and that they also expect to receive reports on specific impacts and costs.

6. We are responding less to traditional marketing methods. Due to the habits of Gen Y (23-37 year olds), the most successful advertising campaigns over the next decade will be delivered via social media rather than traditional methods such as mass media, door knocking, phone calls and direct mail. 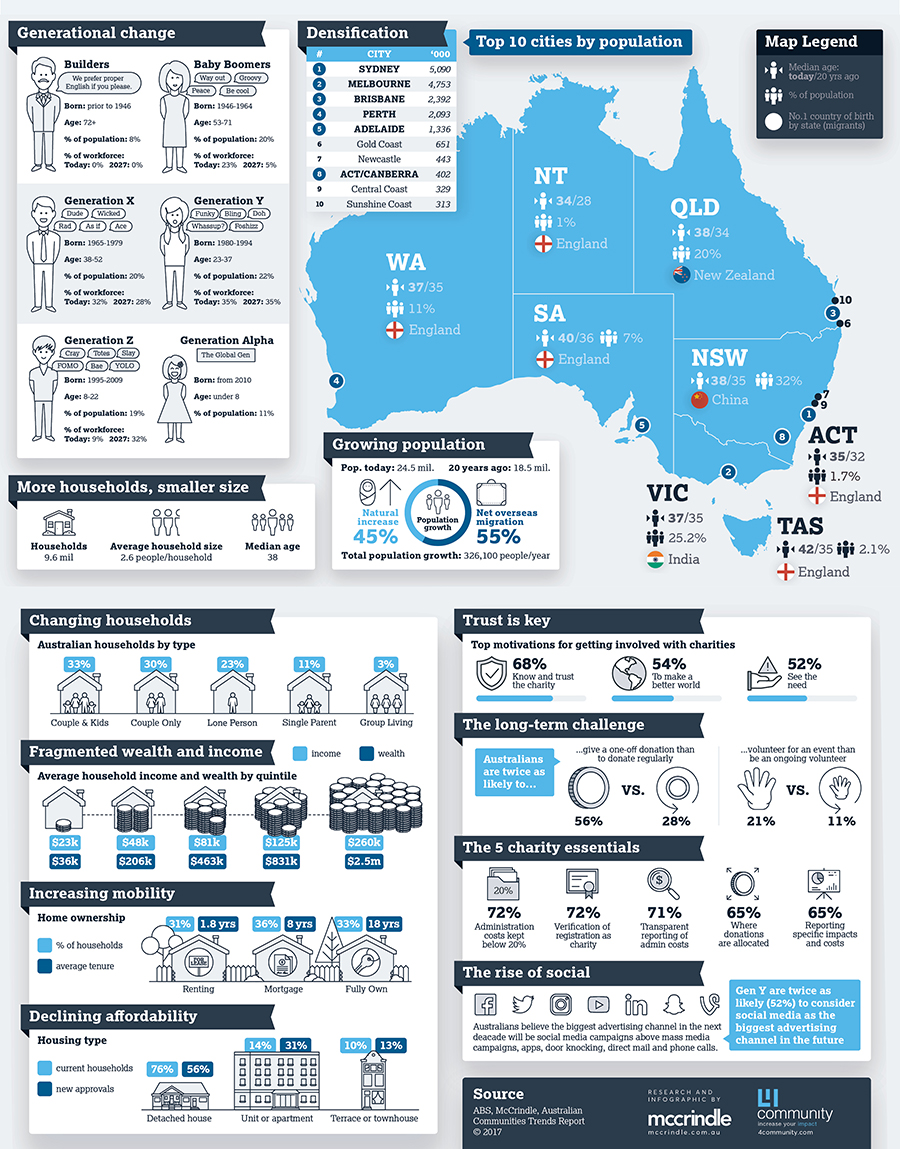 Data not only tells us about our growing, ageing, increasingly diverse, generationally transitioning population, it also enables us to observe trends and gain practical insights into the needs and motivations of our changing community.

Social Impact Institute has proven itself adept at helping not for profits navigate their way through the lessons we learnt at the Changing Face of Australia Breakfast and what that means for the not for profit sector. Services are available throughout Australia, including Sydney, Melbourne, Brisbane and regional areas. Call us on 1800 822 763 to have a chat or book your consultation today.